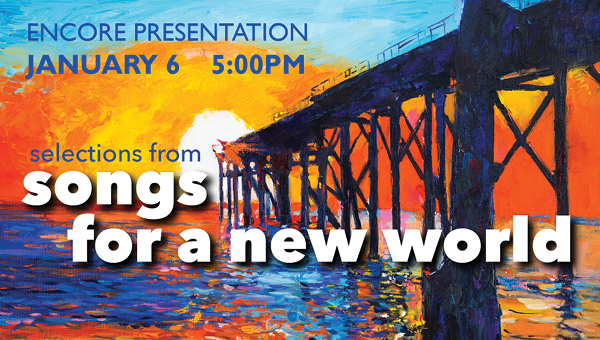 Songs for a New World

Concert is free and open to the community; bring a friend! Donations to the Marti Johnson Music Fund, which benefits St. Paul’s music ministry, will be accepted. Light refreshments and child care available.

Songs for a New World is, according to composer Jason Robert Brown, “about one moment. It’s about hitting the wall and having to make a choice, or take a stand, or turn around and go back.” This theatrical song cycle blends elements of pop, gospel and jazz.

“Songs for a New World is essentially a collection of songs describing different characters who have found themselves in situations that move them to look forward to a day when their struggles are over. As the title suggests, they are all songs describing the possibility that we can one day experience a better day in our own lives, as a community, a culture, and a world.

I fell in love with the work when I was a freshman in college, immediately drawn to its message. It personally got me through a lot of tough situations. The inspiration to present it at St. Paul’s came from the idea that the varying styles of music can be enjoyed by anyone in the congregation. I also believe that many struggles that the characters face exemplify those of the people of St. Paul’s. We are trying to be the change for the better and remain focused on the fact that a better world is possible and worth fighting for in unsettling times.”

About the Marti Johnson Music Fund
St. Paul’s Marti Johnson Music Fund was established in 2012 to enhance our music ministry through purchasing new instruments, bringing in guest musicians, and other special needs that may arise. In addition, each year as funds are available, St. Paul’s provides a grant to a student seeking a college degree related to music. Donations to the fund are always welcome, but the primary avenue for funding is through our annual benefit concert.

Since its inception, donations to the Music Fund have provided St. Paul’s with these music ministry needs and scholarships: